We look back at an eventful WSC 2019 to look ahead at what comes next for Team Sonnenwagen Aachen. 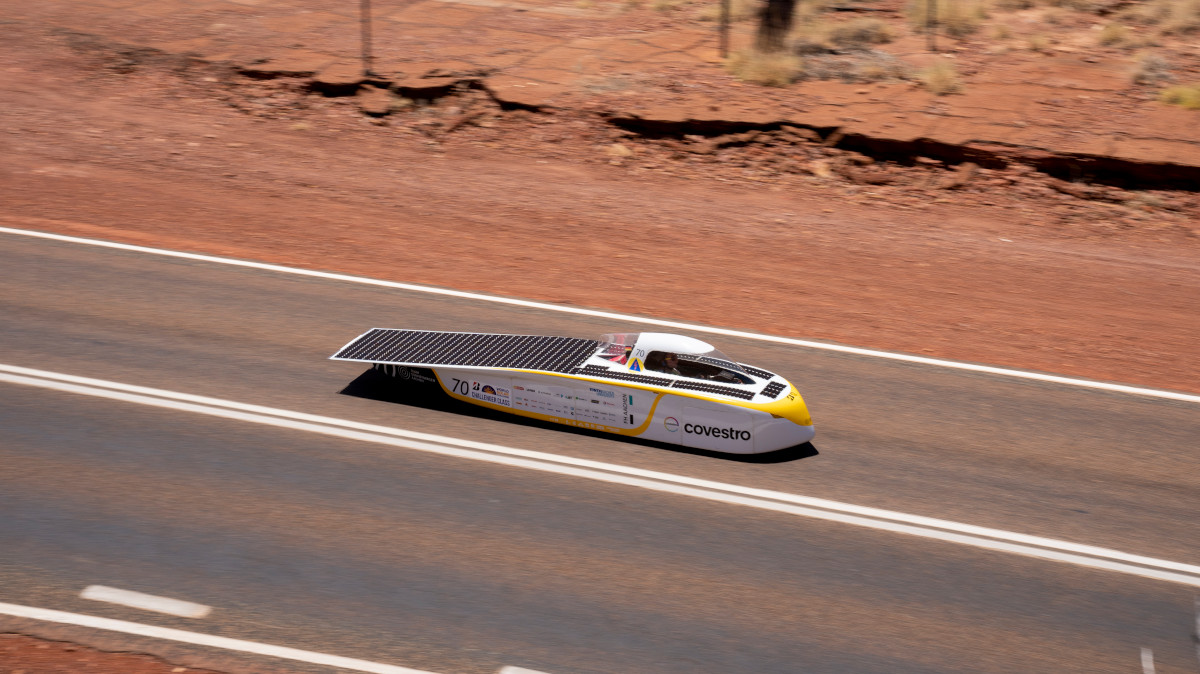 During the race qualifiers, the team had secured a very good starting place, however, lost some positions during the first moments of Day 1 due to a lack of experience with the competition. The next day, the team was able to overtake several other teams, securing 4th place. At the end of Day 2, the Covestro Sonnenwagen was 20 minutes ahead of the other cars and were edging closer to the top 3 competitors. The steady pace continued through to Day 3, where the team didn’t see another car in their rear mirror all day! They finished the day on the same position they had started: 4th. At the end of the day however, dark clouds were forming on the horizon. A bad omen? The team had to finish the race day in the middle of a sandstorm – luckily, neither team nor car were harmed or damaged.

Then came Day 4, and luck seemed to have changed for Team Sonnenwagen Aachen. A few hours after the race started again and about 30 km north of Coober Pedy, the Covestro Sonnenwagen was hit by a harsh gust of wind, after passing a road train and while driving over bumps in the road. The driver lost control over the car and rolled over multiple times. Luckily, the driver wasn’t hurt, but he was still sent to hospital for further checkups. He was cleared by a doctor and was able to continue the journey to Adelaide. The car, however, looked like it had suffered severe damages. Would the team be able to continue the race? The answer was, yes! After approximately 5 hours, the car was back on the road racing again. This was possible because the occupant cells, suspension and roll bar – all safety relevant elements – were still intact. Only the outer shell was damaged.

Team Sonnenwagen wasn’t only determined to build a highly efficient and finely engineered solar car, they also believed in finishing the race on their ‘own wheels’. Therefore, they continued onwards and were surely rewarded. For their determination to never give up, they received the David Fewchuk Spirit of the Event Award. For the good reaction after the accident and for their operation of the pit box in Darwin, Team Sonnenwagen also received the Safety Award of the race.

The next day, the team continued southwards. The pace was strong and Team Sonnenwagen were hopeful to reach Adelaide that day. However, luck once again wasn’t on their side, when the shock absorber stopped working. An unexpected road stop had to be taken, however, with the help of another team, they were able to fix it again. And then finally, on Day 6 at 10 o’clock in the morning, the Covestro Sonnenwagen crossed the finish line. Battered and bruised, but in one piece and securing a great 6th place.

The final result of the race, the determination and good work that followed after the accident and also the meticulous preparations prior to the race proved that Team Sonnenwagen indeed are one of the Top Solar Car Teams in the world.

We are excited to follow them on their next journey only powered by the sun!