From Coober Pedy, team Sonnenwagen travelled approximately 2,100 km to Darwin. Check out their update from being on the road. 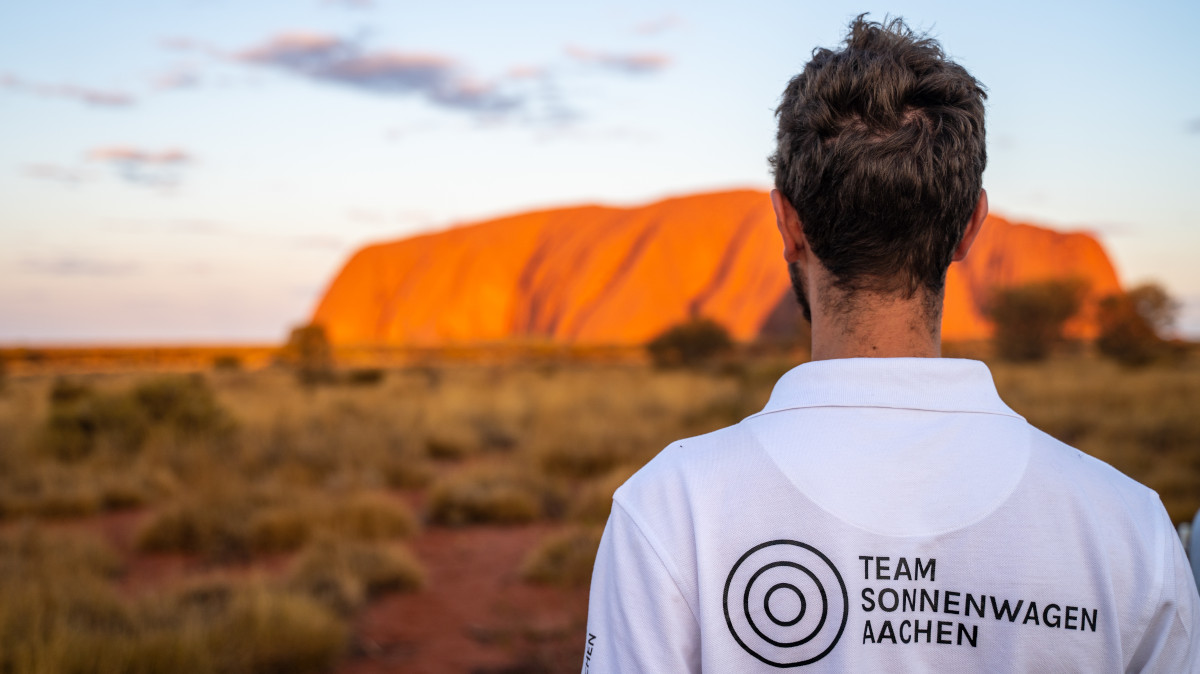 During their time in Coober Pedy, Team Sonnenwagen continued testing their solar car under real conditions on the Stuart Highway. The team gathered a lot of valuable information on the car and how it would behave in the Outback. Now, they are ready to hit the road again and travel up to the capital of the Northern Territory: Darwin.

From Coober Pedy, our team from RWTH Aachen travelled approximately 2,100 km to Darwin. On their way through the Red Centre they passed Uluru, Alice Springs and Mataranka Springs.

One of the most iconic landmarks of Australia is probably Uluru, better known as Ayers Rock. This orange-red rock is probably one of the best known and most popular photo motifs of tourists coming to Australia. It was created over 600 million years ago. Above ground, it is about 350 m metres high, underground it reaches about 2.5 km deep (nobody knows how deep exactly). Actually, Uluru is higher than the Eiffel tower (300 m), the Statue of Liberty (93 m) or the Cheops-Pyramid (139 m).

Alice Springs, locally known as ‘Alice’ is located almost in the exact middle of the country, and basically halfway between Darwin and Adelaide (around 1,500 km from each other). This made it a natural pit stop for our Team Sonnenwagen. Unlike its location would indicate, this town has much to offer. Did you know, for example, that Alice Springs has the most art galleries per capita than any other place in Australia? What’s more, according to different internet sources, ‘the Alice’ is the closest town to every beach in the country.

Another interesting aspect that you and our Team Sonnenwagen will come across when traveling through Outback Australia is the ‘Royal Flying Doctor Service’ (RFDS). It was the first flying medical service worldwide and has been providing emergency and health care to people living in remote areas since 1912. When in Alice Springs, you should stop by the dedicated museum, the RFDS Alice Springs Tourist Facility, where you will find interesting facts about the service. The Alice Springs Base coveres an area of approximately 1.25 million km2. Let’s hope our team Sonnenwagen won’t need to take advantage of this – but it’s still good to know that a service like the Royal Flying Doctors exist.

After their exciting trip through the Outback, the team now set up camp in Darwin. It will be their last workshop in Australia. At the Hidden Valley Racetrack, they prepare for the race start on 13. October.

Stay tuned for more news and updates and follow Team Sonnenwagen’s journey back to Adelaide – only powered by the sun!

Check out our image gallery for more amazing pictures from Team Sonnenwagen's trip through the Red Centre.