Back with a bang: this weekend, Team Sonnenwagen finished their first race of the season with a double victory! The students from RWTH Aachen and FH Aachen gave it their all at the iLumen European Solar Challenge (iESC) in Zolder, Belgium, leaving the competition behind. 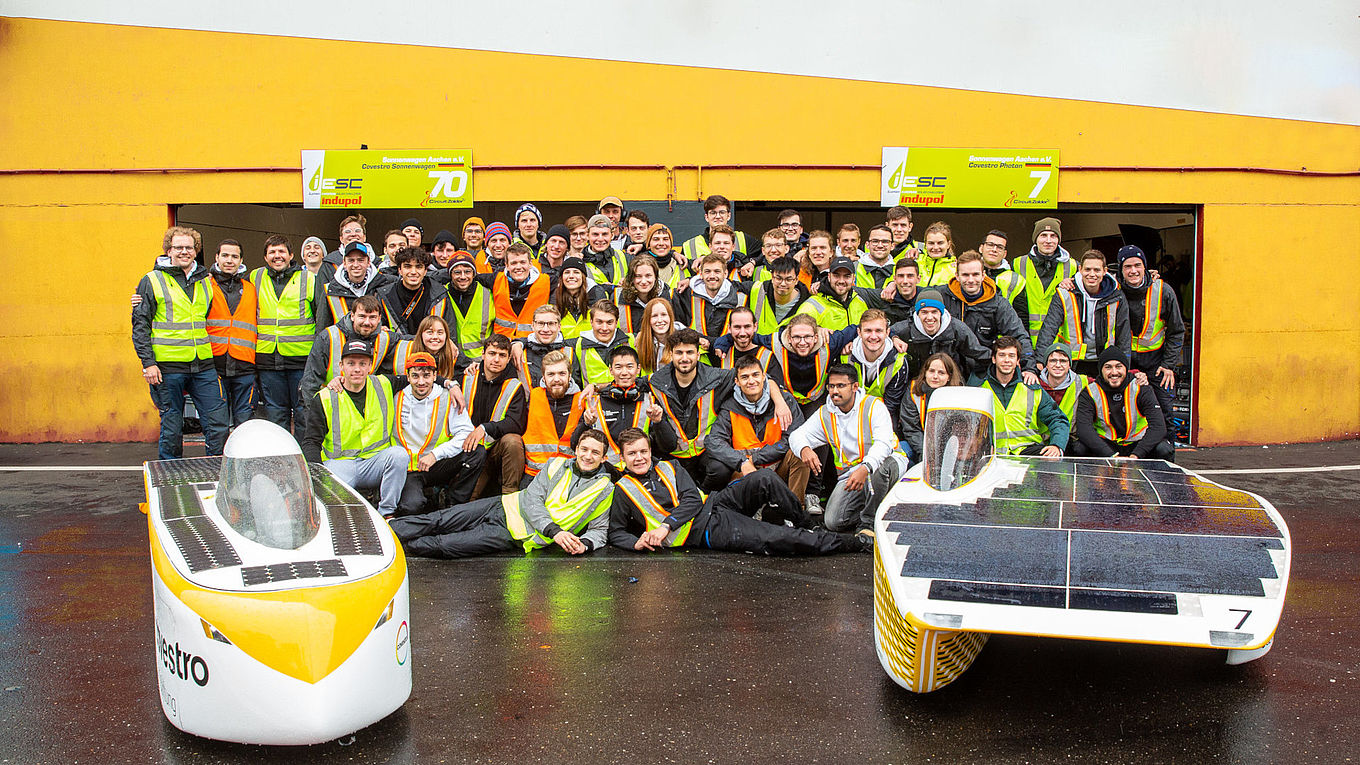 Like last year, Team Sonnenwagen entered the iESC with two solar cars: the Covestro Photon and the Covestro Sonnenwagen. Prior to the race, both of them had to undergo so-called static and dynamic scrutineering, which means that they were first checked by staff and then drove a hot lap on the circuit. The Covestro Photon came in first during the latter – a sign for things to come!

Racing in the rain

During the race, Team Sonnenwagen not only had to deal with their competition, but also with rainy weather. That meant that the grip on the track was constantly changing, adding an extra layer of difficulty to the already quite tricky Circuit Zolder. In light of this and the crash in Morocco, it was safe to assume that the German students would adopt a more prudent approach for Belgium – or would they?

No, they would not: it turned out that Team Sonnenwagen was determined to win, and they were more than up to the task. The drivers of the Covestro Photon and the Covestro Sonnenwagen negotiated the track with incredible skill, rain or not. They were supported by a highly efficient and motivated pit crew, who made sure that both solar cars would go the distance during the 24h endurance race. On the technical side of things, the newly built battery for the Covestro Photon worked excellently and showed the engineering prowess of Team Sonnenwagen.

However, other teams also had a say in this competition. The Dutch Solar Team Twente proved to be the fiercest challenger, always hot in pursuit and attacking Team Sonnenwagen for first place at every opportunity. After a nerve-wracking neck-to-neck race, the Dutch team unfortunately had to bow out early due to technical difficulties. We are sure, however, that Team Sonnenwagen will meet them again in future races!

With Solar Team Twente out of the picture, the rest of the race was smooth sailing for Team Sonnenwagen. The Covestro Photon won the race with a total of 285 laps in 24h, followed by the Covestro Sonnenwagen with 258 laps – congratulations to the new European champion and the runner up!

Team Sonnenwagen already have their eyes set on the next competition, the Italy Solar Challenge. This race will take place in Imola from 26th to 30th September, and the German student team is already looking forward to defending their title as European champion. This will be the first time they participate on the F1 track – stay tuned to see how they fare!