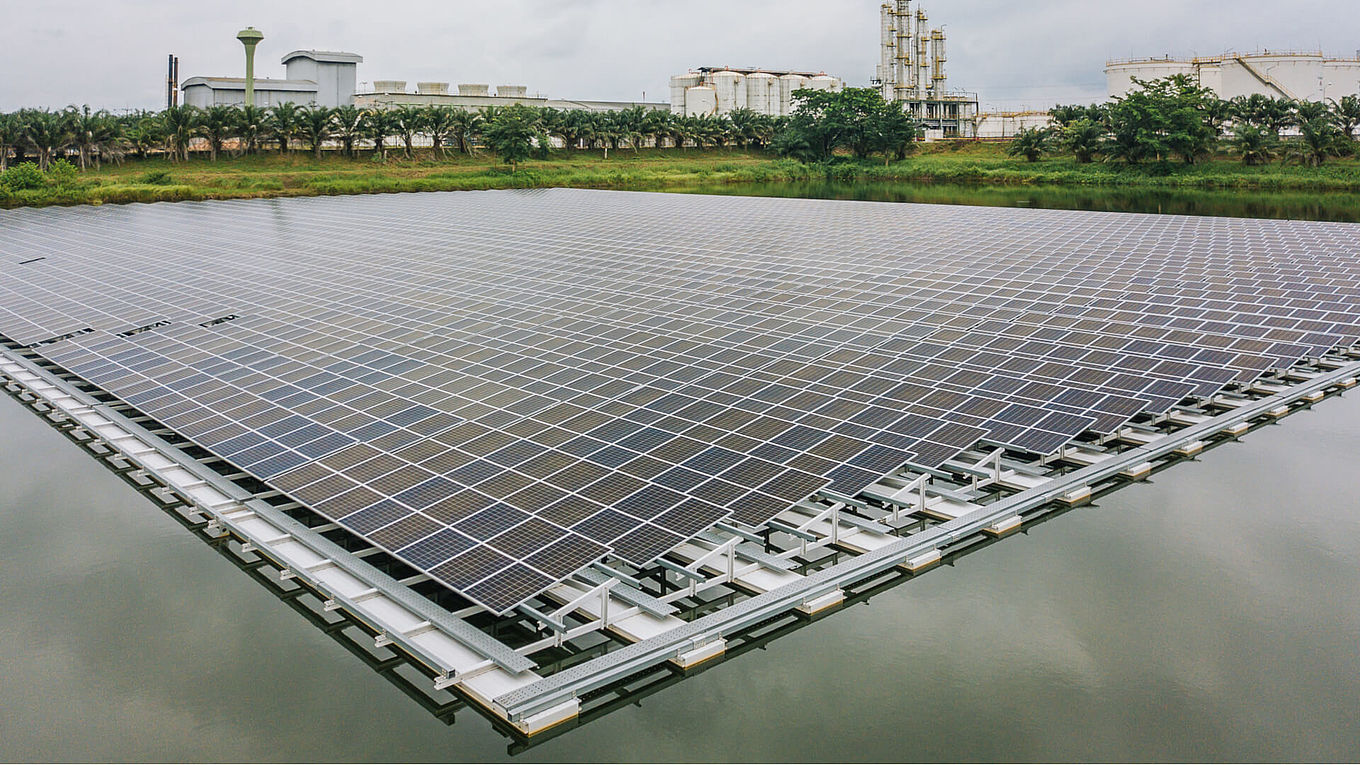 A global transition to renewables means using every opportunity for available space, and Floating-PV (you might see it called floating solar or floatovoltaics) is one area where opportunity and innovation are combining to produce impressive results.

Floating-PV is exactly what it sounds like; taking unused bodies of water and floating solar panels on them. There’s an estimated 400,000 km2 of man-made reservoirs around the world, meaning terawatts of global potential now that the technology has been proven.

Now, everyone from landowners to corporates and local authorities are reaping the benefits:

Here at BayWa r.e. we’ve been playing a keen part in getting Floating-PV to where it is today. We’ve installed dozens of projects in Europe across regions such as the Netherlands, Belgium and Luxembourg. We even developed our own floatation system, when nothing on the market met our requirements.

That informed perspective is letting us do what we do best: applying global experience with local knowledge in key renewable energy markets all over the world.

This site at Sirindhorn Dam had only just been hooked up to the grid when EGAT unveiled their ambitions for a second farm in Khon Kaen. Expect that this year, it’s already part of their 2022 power development plan.

Asia enjoys a long, close relationship with Floating-PV. Scarce land needed for agriculture combined with large bodies of open water made it an ideal match. Japan was the first nation to complete a floating solar farm in 2007 and is still home to nearly three quarters of the world’s 100 biggest projects.

Further south, we’re benefitting from that same level of confidence in the technology. There’s enormous appetite in Thailand and Korea to take the lessons learned from existing projects and expand. A lot of industry here involves the use of large bodies of water for everything from treatment to cooling. Floating-PV can actually help with that second function, as well as unlocking dual use of the water itself.

Manufacturers and landowners are increasingly eager to get involved with Floating-PV after seeing these positive examples. BayWa r.e. is involved with everything from design and financing to construction and operations, so we’ve got a strong level of insight into what these businesses are trying to achieve long-term.

For businesses who own and use bodies of water next to their premises, it’s often a good accompaniment or more viable replacement for roof-mounted PV projects. They can set up a direct wire PPA and start generating their own renewable energy in a short span of time.

One example of this, is in Ubon Ratchathani in Thailand where we’ve recently worked with Ubon Bio Ethanol PCL (UBE) - a leading manufacturer and distributor of processed cassava products. The business has a number of large ponds at its facility, and we’ve installed a floating solar system which will help their transition to green energy and self-power generation reliance.

You can read the press release here

I mentioned briefly how PV floats can help cool water and reduce evaporation. In some industrial settings, ethanol refineries for example, multiple bodies of water are used sequentially for cooling. Later pools in the sequence are used less than ones earlier in the chain. That makes them able to host more modules, but even those fewer modules installed above the first couple of pools are adding value to the refinery’s core process.

If your business would benefit by embracing Floating-PV, BayWa r.e. can help you navigate policy constraints and permit processes in your marketplace. We can also recommend the right technology to get the most out of your project. The evidence suggests it’s a conversation worth having.